More memories from Spike. He’s now living the life of a retired insurance executive down in the tropics. We could sit over beers with Spike down at his perfect émigré abode in Mérida, ruins of ancient civilizations all around, and discuss old times. Un otra Pacifico por favor. A bowl of chops and guacamole, the sauce is very hot. The fan would spin slowly overhead and flies would buzz and we’d sip the ice cold beer and remember old times, laughing. Until then, though, he’s in Mérida and we’re still in LA and we chatter away over Facebook. He posts photos–I can’t believe all these photos–from thirty some years ago and brings back memories. We reminisce, combing the memories, teasing a narrative out of them. It’s a ball. Good times. Bad times, too, but they turn into good times with time. Younger days, crazy times. He digs up an account of a notorious party, only twenty seven words, and a whole universe comes rushing back, the feel of it, the sounds, sights, smells (cheap pot and poppers, mostly), the raw creativity of it all, in everything we did…. 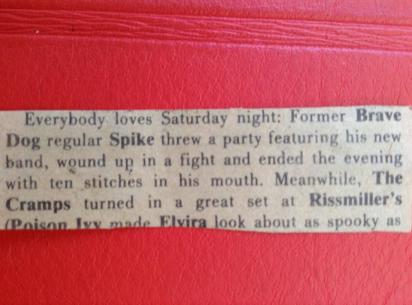 Craig Lee’s review of World Zero’s debut in the LA Weekly from 1983, I think.

We missed the fight–and the gig–because the little security guard out front wouldn’t let us in. This was Melrose and Western on the fringes of Hollywood in the bad ol’ daze where big scary drag queens hung out and mugged people and the security guard took one look at my big combat booted punk rock hulkingness and my wife’s fearless insults and death stares (not to mention all the beer we were carrying) and he hid behind the gate and wouldn’t let us in. No come in! No come in! There was a lot of commotion inside, feedback, laughter, shouting. Some sort of punk rock catharsis and there we were, out on the sidewalk. We’re invited we said. No come in! No come in! Go get Spike, he’ll let us in! But Spike wasn’t in condition to let anybody in. Spike was bleeding. Not that we knew that at the time. We just thought it was a helluva party. Feedback, shouting, laughter and curses meant good times back then. Go get Spike! No come in, he said. We gave up. I’m sure we were very nice about it. The next day we heard the eyewitness account from Chuck and Ellen. Ellen laughed her famous laugh. Some crazy chick had sucker punched Spike. Blood everywhere. Never did find out why. Did there have to be a reason? When we read Craig Lee’s blurb in the LA Weekly–it’s probably in our scrapbook–we probably said more nice things about the security guard. People said World Zero was good. Said you guys missed a good one. Don’t blame us, we said, we were outside with the beer. Well, you’ll see them next time. Big things were portended. Post-punk. New Romantic? No, post-punk. I was relieved. I loved post-punk, not much into New-Ro (or was it Nu-Ro?). Besides I couldn’t imagine Spike doing anything that wasn’t intense. I remember him in Publik Enema in ’78 or ’79. He blew my mind. I’d never seen a singer like that. Or a band like that. That band helped change everything I thought about rock’n’roll at the time. Like how you could completely reinvent it, and scare people, and blow their minds. At the time there seemed nothing more important. I doubt Spike even realizes the impact he had on me. So I couldn’t wait to see World Zero. Alas, somehow I never did see them. In fact, I had gotten it in my head that they had never played another gig. That there was some spectacular blow up at the party, Spike getting punched out, the band imploding. One of those bands that played one gig and broke up and we still talk about them thirty years later. Actually, World Zero were around a year and recorded a demo and everything. Seems I had gotten World Zero confused with a band with another band with Spike, one that I was in. Think we were called Worm Farmer, though I have no idea where that name came from. We practiced intensely for a gig up in Santa Barbara we weren’t even on. The Goleta Valley Community Center. Every punk on the central coast was there, misbehaving. Someone snuck us on the stage. Spike never showed up. Well, he had, but he and I had stood on the steps earlier screaming at each other–who knows why–and he stormed off into the night. We played anyway. It went well, no one got punched out or anything, no blood, but we never played another one.

We still talk about that gig thirty years later, too. I was in bands in my thirties and even forties that played lots of gigs but didn’t have the same impact on me. I suppose life is much more intense in your twenties. Things are more vivid, they mean more. Everything is new. Thirty years on, we’ve seen it all before. Even if we haven’t it seems like we have. Even writing something like this, I swear I’d written it before. Maybe I did, once, in my head. Or maybe in a scrap of a letter I never sent. Probably not, though. The brain is just so used to hearing the same damn stories over and over it just assumes I’m repeating myself. It probably just reflects the ennui all about us. Just look around you. These are jaded days. Textured. Emotionally distant. Art is all concept, writing is sucked dry by irony, music is trapped in genres. Back then, though, those were different times. The poets, they acted weird as fuck, and the ladies, they made them cry.

Staying in tonight, we’re going to see Chuck Manning at the York tomorrow. Been listening to ancient radio comedies all week. Amazing how weird and conceptual and hysterically funny this stuff was, TV comedy has rarely come close, and never gotten beyond it. The mind’s eye can visualize so much more than our meager real […]

Some blistering guitar work in this linked video by Mike Bloomfield with the Electric Flag at the Monterey Pop Festival. The Flag, alas, were one of the acts that didn’t make it into the movie, which is a shame as Bloomfield was at the top of his game. But then the Electric Flag not making […]

I admit it, I voted for Mike Bloomberg. I think it was the last one hundred mailings that won me over. Not that I read any of them. But there were so many it just had to be presidential. Liz Warren only sent a few, which I read. She had my vote for the first […]

If you really want to see the extent of Bernie’s problem this year, compare the results of the Vermont primary yesterday with those of 2016. Not the exit poll data, but the votes themselves. He won with 85% last time, or just shy of 116,000 votes. Yesterday, with 16,000 more Vermonters coming to the polls […]

Thoughts on a few seconds of The Third Man

Interesting bit in The Third Man that few probably pick upon anymore…after Holley Martins (Joseph Cotten) first meets Baron Kurtz, they go walking down the sidewalk together. Kurtz has vaguely Mediterranean features and it dawned on me that the character might be Jewish. It had never occurred to me before because Austria had been thoroughly […]

It’s all so eerie. Emails have just about stopped. Facebook is a trickle. Even Twitter has slowed dramatically. Come nightfall you don’t see people on the street, the neighbors have almost disappeared, traffic is almost not there, and now almost everyone on social media has vanished. This is the weirdest fucking time I can ever […]

Coronavirus breaking news overload. It’s everywhere all the time. Weeks of it. There’s no escape. The endless tension begins to take a physical toll. You feel lousy, jumpy, taut with nerves. You stop, turn it off, look for diversions, then sit at home staring in the dark.

That ephemeral sensation of newness is gone now. It lasts a day, maybe two, and then disappears like a morning fog. I’d never written about it before. If I hadn’t written about it I’d never even know about it, it’s so fleeting, no more permanent than a dream you can’t remember the details of an […]

After a dozen hours of sleep the brain has settled down nicely. Realized I hadn’t been outta the house for a couple days and went to take down some bags to the bins and get the mail and I had this inexplicable trepidation. When I went outside it was like I’d never done it before. […]