The photographer Joe LaRusso took this shot of me today.  Well, he took a bunch but for some reason this was my favorite.  Damn, I got big hands, I never realized that. That’s a 16 oz cofee cup, and that size 15, 6 mm wedding band looks like something from a cracker jacks box.

An editor brought me and the photographer together to discuss a project (which sadly never got off the ground) that had me writing a couple essays for a collection of  LoRusso’s boxing photos.  We’re talking and talking at this little coffee shop on Santa Monica Blvd. and I look up and LaRusso is taking a pic of me on a little digital camera. Takes a couple more. He shows me a couple, they looked cool, actually. The guy was good. He keeps shooting as I’m talking and I made a crack about giving the finger and then the guy starts taking shots of my hands. Hence this. To be honest it’s my favorite pic of me for some reason.  A lot of muscle in those mits. They are huge. I had never really noticed that before, being that they are part of me. Funny how a writer spends so much time watching his hands dance across a keyboard, but never actually sees them. I stare at my hands but see words.  But I stare at this picture and I see why gloves don’t fit. 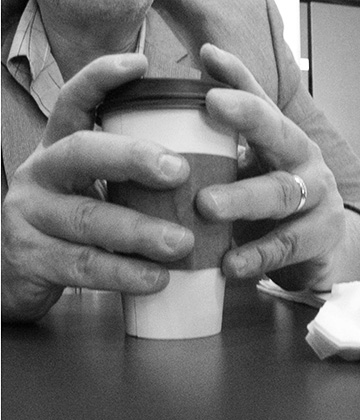 Danny Thomas’s first spit take. It’s there at the end of the bit. Though he didn’t invent the art form, Danny Thomas—Marlo’s dad—was the Jimi Hendrix of spit takes, and even if we kids didn’t get the jokes we loved his spit takes, because he was Danny Thomas, who was still on TV weekly and […]

Found this in my drafts, completely forgotten. I only found it again when one of these bits–Walking About–wound up on a tee shirt in Australia. Seems I had once spent a late evening on YouTube digging up old tunes from my past life and writing about them. They’re not for the jazzbos, most of ’em, they’re […]

In case you were wondering how Donald Trump became president.

Hoover flags, they called empty pockets in 1931, and they became emblematic of Herbert Hoover’s abject failure in dealing with the Great Depression. I suspect homemade face masks are becoming Trump’s Hoover Flags.

However, the Julian calendar did approximate the solar year, and was not just some arbitrary sequence pulled out of Julius Caesar’s assassination. Unfortunately the rest of the post was deleted.

Climate change in our fish tank

You wouldn’t think you could have a climate change caused ecological disaster in our fish tank. But last week’s heat wave was so extreme it overheated the water, killing a few of the fish as well as unseen zillions of microscopic algae. Days later they clogged the filter in a rank slimy dark mass and […]

These sentences seem adrift on their own

[from 2019, I think] Head on a floor cushion I just woke from a three hour nap on the floor in front of the TV. If I hadn’t had to piss I’d still be asleep there. Woke up having no clue what time it was. 3 am? 7 am? That panicky retired guy sensation that […]

January, 2017 Fifteen years ago, I worked for about thirty or so people, from executives on down, and I handled all their expense reports and purchases and you name it. I was so good at it that I was one of the employees that others would come to when they were stumped trying to figure […]