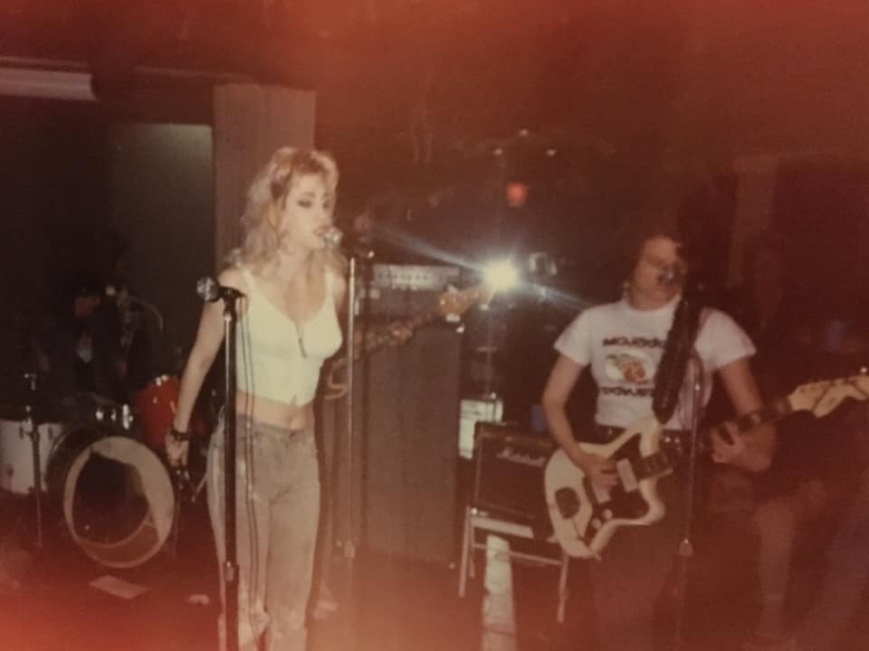 Didn’t know I had this one, a shot of the Creamers from back in the mid 80’s, Sue Gorilla on guitar, and Leesa Poole just gorgeous at the microphone. I liked Leesa a lot, we were good buddies, and for a while she ran an office on Wilshire Blvd next door to where I worked, her day gig and my day gig side by side. I think we’re talking 1987. I can’t remember what she did, maybe corporate recruiting, while I worked then at the corporate headquarters of US Borax, running the mail room and shipping department and a small warehouse and sundry other sections. It was my sole stint as a manager, with a crew of ten or so. Leesa had called and said let’s do lunch in a couple days and at the appointed time she came down to my basement office to pick me up. I was in my usual blue collar business casual. She wasn’t.

No, she was dressed to kill in a leather mini miniskirt and crazily ripped black hose and wild heeled boots, while above she was in some tight spangled tee shirt and a studded denim jacket and her hair a platinum explosion. There was a billowy scarf and jangly bracelets and rings and necklaces and look at me earrings. There was even a tattoo. She looked fabulous and was probably the wildest thing seen on Wilshire Boulevard east of La Brea in years. I laughed—I mean I’d never seen her in this get up, on stage she looked positively puritanical in comparison, but this I assume was her daily office duds. My crew, on the other hand, did not laugh, or do anything. They were stunned into complete silence and just stared, eyes wide, jaws dropped. Remember, this was still the Reagan 80’s, dreary and conservative, and nothing had been seen like Leesa since the wild 70’s, and none of that even then had ever permeated my crew’s working class enclaves. As Leesa and I headed out they found excuses to follow us down the hall, one even ran ahead to hold the elevator door open, and when the door opened again on the first floor there was somehow a small audience trying to look like they weren’t staring. I have no idea how they collected there so quickly, but office buildings before the internet were like villages of a few hundred people, and juicy information could be passed from floor to floor with astonishing speed. Before we’d even left the building the chatter had begun.

I can’t remember where we had lunch or what we talked about, but I do remember that by the time I got back to the office the news of my supposedly wanton escapade had gotten all the way to the ninth floor. It didn’t help that I quite literally knew every single person in the building, especially the secretaries with whom I worked very closely. Every secretary, even today, is like a switchboard. If they heard that I was messing around with a real live movie star who looked exactly like Debbie Harry (as the report had it by the time it reached the ninth floor) then their entire department would know it as well, as any nearby secretaries. Over the next couple days I had to explain to the secretaries that no, I wasn’t having a fling with a wild rock star. It was just lunch, I said. Yes, my wife knows her, we’re all friends. Yes, my wife knew about the lunch. No, she’s not a movie star. No, she’s not a rock star. She’s a singer in a band. No, not a famous band…. I must have been convincing as the chatter and whispers faded away. Besides I was a nice guy. I wasn’t chasing anybody around any desks or being a creep. There wasn’t much to hang such a juicy rumor on. But lesson learned, and that was the very last time I ever let the day gig get a glimpse of my real life, something I stuck by for the next twenty five years of my professional life. It’s better that way. Let them think I’m normal became a mantra. Well, sort of normal anyway.

I hadn’t remembered any of this in years, perhaps decades, until I saw this photograph. Fun band, the Creamers. I doubt Leesa ever knew the stir she caused at US Borax. I doubt anybody I knew outside work ever did. I never told a soul. Some things are better left unspoken for thirty years or so.