So Channel 36 is showing a gig from the John Anson Ford Theatre here in Hollywood–something called Jail Guitar Doors–and there’s all these bands and they don’t give any of their names. There were two rock bands I liked, then this Jackson Browne kinda deal that was, um, a little rough in the playing and harmony thing, and I’m telling my wife there’s some band here trying to sound like Jackson Browne–she can’t stand Jackson Browne–and suddenly they really did sound like Jackson Browne and no wonder, it was Jackson Browne, the real one, not the wanna be, running on empty, and I guess that was David Lindley. Then it was another act. No idea who. The crowd was up on their feet, following orders, and seeming to dig it. I was kinda uhhh but they jammed some on one tune which was cool. Still no hint who anybody is. They’re mostly young. I also don’t know what Jail Guitar Doors is, aside from a Clash b-side.

It just occurred to me that when I was at the LA Weekly I would have known who all these people were. They’d have this press thing, we’d all go, meet the promoters, a few musicians, be mugged by ill-clad samba dancers (well, that happened once), get a tour of the joint, be fed little finger things and drink lots of wine. One of those events where you’re just some bum on Cahuenga until you pull in and your name is on the list and you’re somebody and hanging with Lee Solters at a tiny table and eating pizza. Lee Solters, baby. One degree from Frank Sinatra. Hollywood. I said I’d tell that story some day and I just did. Ya know, the music press lives for this kinda shit. Free food, wine, samba dancers, people kissing your ass. And I always liked that event, but I had to be so nice back then. Not anymore. The less you get invited, the meaner you can be.

Uh oh, all the musicians are on stage doing a Kiss song. I wanna rock’n’roll all night and party every day. This is where I would have left, pulled out onto Cahuenga and been a bum again. 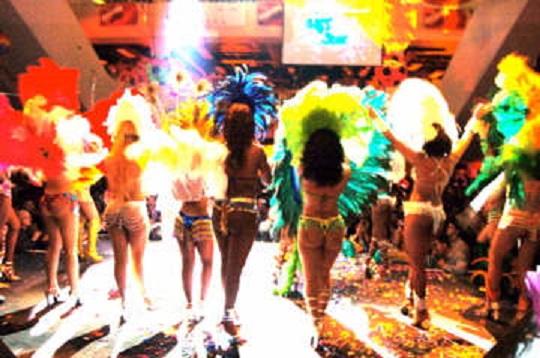 Those same samba dancers. Or three of them were, anyway. And maybe mugged is an exaggeration. This is from the Queen Mary, though. I was at this event. The table was right about where the photographer is standing. It was a tough gig. I was with a lady who was wearing about as much as these girls were. Weird things happen to jazz critics.

Steve McQueen smoking a cigarette through Suzanne Pleshette’s toes. We have her dog dishes. Went to a yard sale in Los Feliz and the guy had a mess of stuff from her garage he’d gotten in an estate sale. He’d had some connection to her, I can’t remember what it was. Anyway, there were these […]

The 400,000 people at Woodstock were still antsy, high and loud after Santana’s starmaking performance, but the crew didn’t dare put another electric band on stage till the weather settled down. That upstate New York weather. John Sebastian was hanging around back stage just tripping on the acid he’d dosed somehow, when Chip Monck—that’s his […]

A pair of dice

Here’s a technology that hasn’t changed much in at least 4000 years. The Indus Civilization was astonishing, with beautifully laid out cities, running water and waste drainage systems and a complex economy, alas, we can’t seem to crack the writing, so what we know is mostly deduction. In neighboring Mesopotamia archeologists have dug up a […]

This could seriously use a rewrite but I’ll post it as is for now . . . . When coyotes wiped out all the cats outdoors—strays and pets let outside alike—the number of bird species we’d see about tripled. You could even hear it in the variety of songs, even the motherfuckers with the vocal […]

Not only were they huge, but it appears that this Titanes Ammonite pictured below was a free swimming predator, as it’s fossils are so often found in layers of marine sedimentary rock that shows no evidence of bottom life, that is, they were laid in deep water. So like squid, which are also mollusks, they […]