Dick Haymes came up today online. Some friends were discussing their favorite singers of the crooner age, Frank Sinatra and all that, but it was Dick Haymes that got the exchange going. How he replaced Sinatra in Tommy Dorsey’s band, and what a superb singer he was, and how those were different times. And they were. People don’t really sing like that anymore. The jazz singers are much more jazz, everyone else has a lot more blues and rock and soul in there, and it’s all much more syncopated than it was back then. Sometimes in those days a band could play so softly, and a crooner croon so mellow, that you could hear the dancers’ shoes slide on the floor. Then the band would belt it out on some hard swinging number. That we can appreciate now, the wailing swing…but it’s the pianissimo passages that are so alien now. Crooning doesn’t stir the kids today. Nor in my day. Blame it on Elvis. Blame it on Basie. Blame it in the thrill of driving a big powerful automobile really fast. Those were different times. The world was at war, hell bent on self-destruction, and people needed to be crooned to. Dick Haymes was one of those who crooned to them, one of the best.

But Dick Haymes always reminds me of a strange little jazz party in Beverly Hills. Right downtown, in fact, with Rodeo Drive a block away and city hall a few doors down. The apartment–yes, a jazz jam in a Beverly Hills apartment building–was packed with people and instruments, lots of food, too much liquor. Med Flory was there with his alto, and Barry Zweig showed up and played. There was a very dapper elderly gentleman there, a retired network executive right down to his grey suit and perfectly shined shoes, and I wound up sitting next to him. He requested the band play a Dick Haymes tune. Med laughed. Dick Haymes? Who? And he blew a frenzied chorus of Ornithology. The man requested Dick Haymes again. Med ignored him, and there were no singers, anyway, and even if there had been none of them could have sung a Dick Haymes song. So as the band argued over the next tune the old man stood up and sang “Laura”. Just a verse or two. His voice was surprisingly deep and full. But the words escaped him and he looked a little bewildered and sat back down. Then he turned to me and began telling me his Dick Haymes stories.  A few minutes later he told me the same stories. Then the same stories again. Alzheimer’s. But I listened each time like I’d never heard them before, because they were good stories–concerts he’d seen in the war days, or after the war, in posh Manhattan clubs, or the times he met him, though sometimes I wasn’t actually sure if he’d met him at all. This went on all night, between blasts of bebop, he’d come up and tell me about Dick Haymes, and each time with a genuine intensity, a youthful ardor that was stirred up after half a century. Dick Haymes is pretty well forgotten now except by swing buffs and music historians. But that day I got a glimpse into the connection he made with his young fans way back in the day. It was vivid, passionate and, like all teenaged fandom, maybe a tad ridiculous. It was unfiltered by mature, adult and slightly cynical wisdom. That’s the thing about Alzheimer’s, it loosens memories from the perspective of time, and that old man was right there at the Palladium again listening to Dick Haymes, seeing him, maybe he was even back there and not in a living room in Beverly Hills, and the orchestra played the arrangements flawlessly and the girls swooned. After a while his son came by to take him home. The old man gave me a firm handshake and looked me right in the eye, though I don’t know if he remembered me, and walked slowly out the door humming “Laura”.

There’s this wonderful old World War Two vet I know, well into his nineties, who I see at clubs and shows all over the place, always dancing. What a nut. I’ve seen him dancing to swing, country, blues, salsa, funk, jazz, western swing and rock. Even reggae. Always has a babe for a partner. Loves to dance, he says. Started dancing to the swing bands. Jitterbugging. All hell was breaking loose over in Europe but he was busy dancing. He was a kid. That’s what you did then, danced. Then came Pearl Harbor and his draft notice. Went through the war without a scratch, somehow, though his unit was mauled a couple times. Some of those Nazis, he said, were fanatics and would fight to the death. It’d be hopeless and they’d keep firing. Friends kept getting killed. Mines going off. Snipers, machine guns, 88’s. He was nearly blown to pieces more than once. The Battle of the Bulge was the worse, he said. They were all freezing cold, and a rifle isn’t particularly useful against a Tiger tank. Thought he’d bought it more than once. On top of all that the Nazis were massacring prisoners. If you were Jewish the last thing you wanted was to surrender to one of those SS bastards. His company had been cut off, and it looked bad, but somehow they managed to rejoin the rest of the battalion. Left a lot of friends there, he said. He saw one blown to smithereens. Should have been him but he had slipped out of the foxhole for chow or to take a leak or something–just before the mortar bullseyed his buddy. Nothing left. Somebody was looking out for you, I said. He laughed. No, just luck. That’s all it ever was, luck. Later, in Germany, all the towns were gone, flattened. The RAF had gotten their revenge. The people were giving up, meekly surrendering. But there were fanatics everywhere. Hitler Youth who kept fighting no matter what. You’d see them later, just kids in baggy grown up uniforms, dead. He kept losing buddies right to the bitter end. Still, he made it and now a zillion years later he dances every chance he gets. A lady comes by and taps him on the shoulder, and they spin slowly, lightly, across the floor. 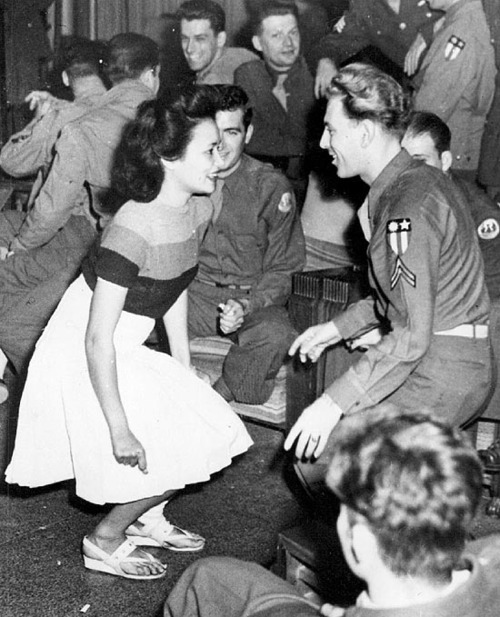 Like Loading...
I got my AARP card as soon as I turned 50, just to terrify my 40 something friends. They’d blanche, grab onto something for balance and order another drink. One in particular, a writer, cute as a bug, seemed to take it especially hard. Happy birthday she said. Yup, I’m fifty. Wow, fifty. I even got my AARP card. She laughed. No really, look. She looked at it, the smile disappeared. Oh no Brick, she said, and this look came over as she thought of all the years she’d wasted collecting stamps, to quote Rufus T. Firefly.
I didn’t laugh. I didn’t even snicker. I just waited several years and wrote this.

Miley Cyrus has turned all my friends old and grumpy. Kids these days, they keep saying, those rotten kids. But what about dressing up like Kiss and sticking out your tongue? What about strutting ass high and wiggling to Sir Mix A Lot? What about– They cut me off. That was different, they say. That wasn’t stupid? No, that was different.  Then someone says twerk and they reach for their AARP cards.